1989 – SCYO formally formed as an incorporated association with initial ensembles of Concert Orchestra and a String Orchestra. 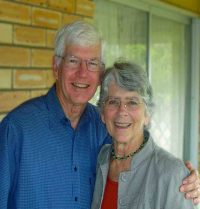 It is understood that a group of young musicians were getting together regularly prior to the “official” formation of the SCYO in 1989, however, no details of this are known, including the length of time for this period. Photos: Clive and Margaret George (Clive being the first president of the SCYO); and Tim Kerr (a member in 1989).